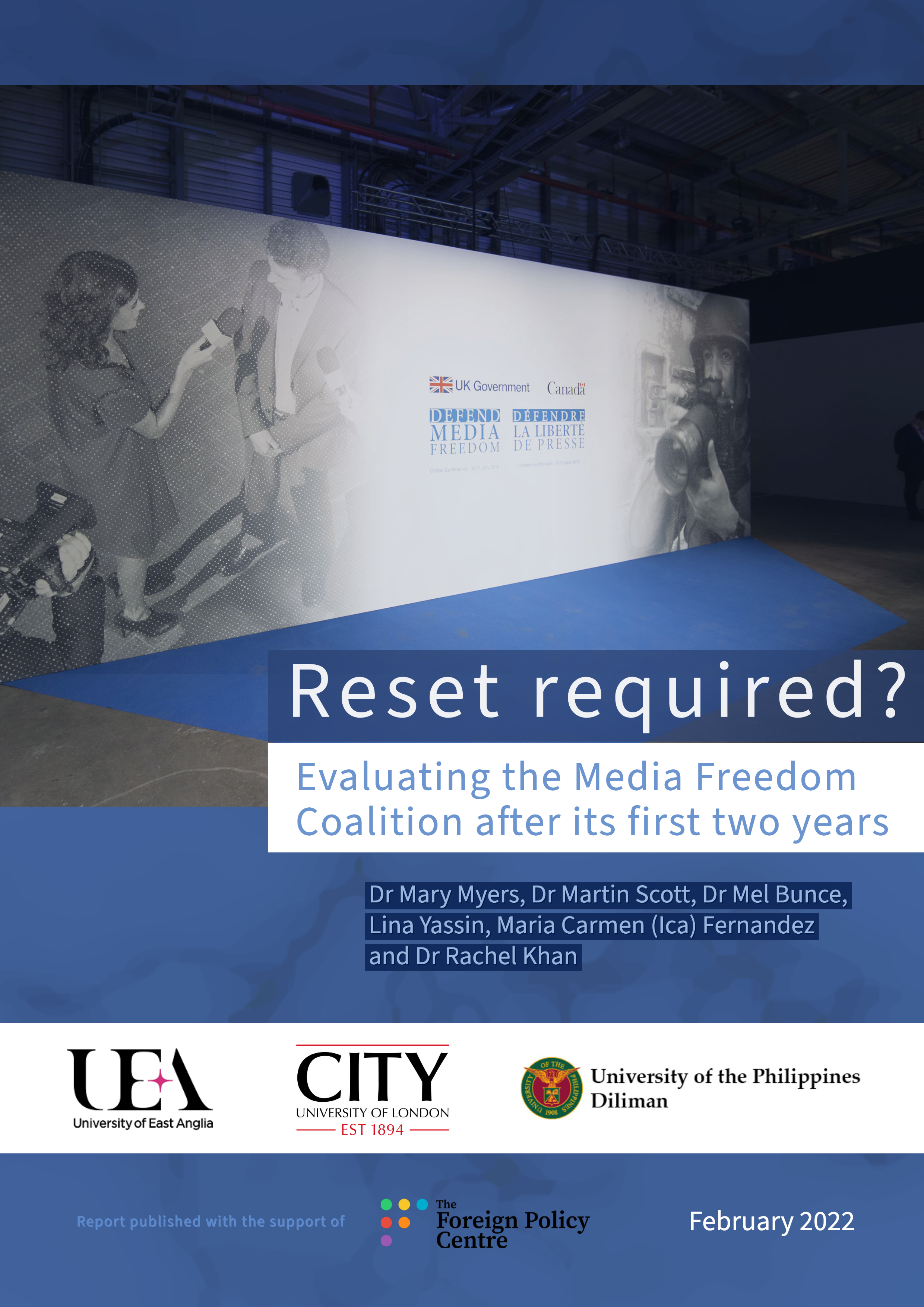 A new evaluation finds that the Media Freedom Coalition requires a ‘re-injection of energy’.

The Foreign Policy Centre is pleased to support the publication of a new report evaluating the first two years of the Media Freedom Coalition (MFC). The MFC is a partnership, established in 2019 by the UK and Canada, of 50 countries working together to advocate for media freedom and the safety of journalists. The report is being was launched on Wednesday 9th February at the Global Conference for Media Freedom in Tallinn, Estonia. Watch the recording of the event here and a short summary of the report can be read here.

A short summary of the report can be found here in English and French.

Conducted by a team of six academics and researchers, from the University of East Anglia, City, University of London and University of the Philippines-Diliman, the report poses one central question: is the Media Freedom Coalition working?

“Our assessment is that the MFC is only partially achieving its objectives,” states Dr Mary Myers, the lead author of the report. “It has taken some positive steps towards its ambitious goals including attracting a relatively large membership and establishing collegiate ways of working. However, partly because of the COVID-19 pandemic, the actions of the MFC have not been as rapid, bold or visible as was initially promised.”

The report concludes that MFC requires a ‘re-set’ and ‘re-injection of energy and funds’ in the next two to three years if it is to achieve its original aims, and provides a scorecard and recommendations to support future development.

“The objective of our report was to identify key areas for improvement to strengthen the MFC’s work moving forward, as such, we hope members of the MFC will take on board our findings and adopt our recommendations,” added Dr Myers.

The evaluation report’s findings are based on over 100 interviews with relevant stakeholders; analyses of news coverage, social media commentary and public statements; and a survey of media freedom campaigners – as well as detailed case studies in Sudan and the Philippines. The research team assessed the MFC against its own pledges to:

– Promote accountability by ‘raising the cost’ to those who abuse or violate media freedom;

– Hold its own members to account over media freedom violations;

– Work together as a coalition, expand the membership and collaborate with partners (including the Consultative Network, UNESCO and the High Level Panel of Legal Experts on Media Freedom;

– ‘Shine a spotlight’ on the issue of media freedom by raising awareness of it; and

– Develop and defend the media by providing practical support to independent media around the world.

The report finds that the Coalition had some early successes. Several states – such as the Maldives and Sierra Leone – have made positive improvements domestically, as a direct result of joining the MFC and there have been several instances of successful private diplomacy by Coalition members working together. However, according to Dr Martin Scott, another of the report’s co-authors, “its working methods have been slow and lacking transparency, its communications poor, and its financial commitments small”.

The evaluation was funded by the Arts and Humanities Research Council UK and the Global Challenges Research Fund. The FPC did not participate in, or contribute to, the evaluation of the MFC, but has supported the report’s publication through its Unsafe for Scrutiny project, which is kindly funded by the Justice for Journalists Foundation.

More information about the Media Freedom Coalition itself can be found here: https://mediafreedomcoalition.org/