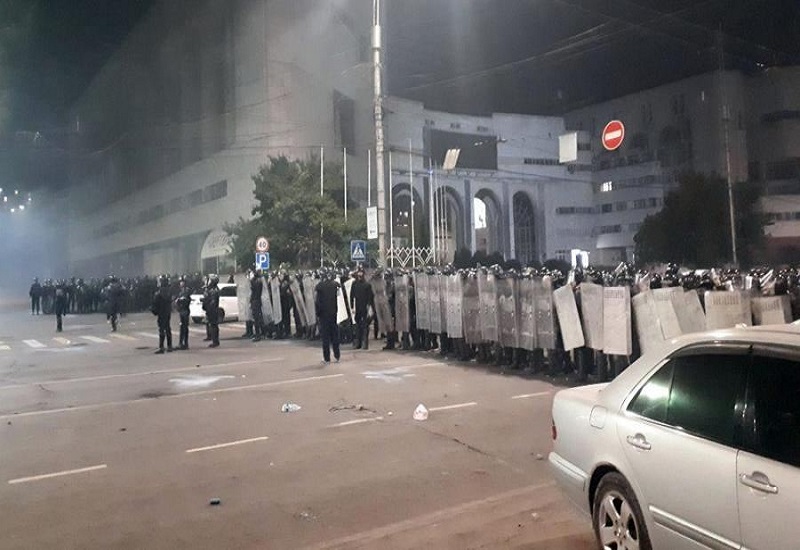 Since October 4th, Kyrgyzstan has been shaken by a wave of unprecedented protests triggered by rigged parliamentary elections.[1]

The country plunged in political turmoil with various divided political forces fighting for power and supporters.

On October 4th, 16 parties stood in the parliamentary election, only four parties passed the seven per cent threshold for entry into parliament. Although Kyrgyzstan has established a plural parliamentary party system, in reality powerful leaders are able to use this system to advance their own agenda. The two leading parties were Birimdik and Mekenim Kyrgyzstan, both have close ties with the current President and are connected to the powerful group leaders. The President’s younger brother, Asylbek Jeenbekov, is a member of Birimdik. Meanwhile, the powerful Matraimov family, who were the target of a high-profile corruption scandal[2] last year, supports Mekenim.[3]

On Monday 5th October, 12 opposition parties jointly declared that they would not recognise the results of the vote as the winning parties have either abused administrative resources or bought the votes.[4] Following the election results, peaceful protests that started in Bishkek have turned into a battle between the protesters and the law enforcement agencies. During the first night, the riot police used rubber bullets and tear gas to disperse the crowds of people. According to the Health Minister’s official data, one person was killed and at least 686 injured during that night.[5] By three am on October 6th, the presidential building had been taken by the protesters.[6] Some of them then freed several politicians from prison including former President Almazbek Atambayev, former Prime Minister Sapar Isakov and Sadyr Japarov. The political unrest in the country forced the Central Election Commission to cancel the election results and have prompted the resignation of Prime Minister Kubatbek Boronov and his cabinet.[7] Jeenbekov also offered to resign once a date for fresh elections had been set and parliament and his office had confirmed changes in government.[8]

In the next few days, as the President of the country went into hiding, the opposition factions made grabs for power.[9] While some attempted to seize administrative seats in the Government, others have tried to resolve the power vacuum legitimately by either impeaching the President or appointing a new Prime Minister through the Parliament. However, this proved to be a challenging task. The first time MPs gathered to appoint Sadyr Japarov as the Interim Prime Minister of the country. However, it was considered illegitimate due to procedural issues of having no quorum.[10]

The second time, while discussing impeachment of Jeenbekov, some of the MPs had left, without reaching the necessary number of votes to pass the motion.[11] When the leaders of the extra-parliamentary opposition finally made the decision to designate Omurbek Babanov for the post of Interim Prime Minister, Japarov and his supporters had already snatched the power from the opposition by resorting to violence and intimidation.[12]

On October 9th, peaceful protests led by Babanov (joined by Atambyev) were attacked on the Ala-Too square by Japarov and his supporters.[13] Although most people were assaulted by stones and bottles, there was one gunshot towards the car of Atambayev. On October 10th, in an extraordinary session, thehas voted to appoint Sadyr Japarov, as the country’s Prime Minister. This time, Japarov secured the backing of the ruling coalition with more than 80 lawmakers from the 120 legislators of the parliament attending the extraordinary session.[14] In the meantime, the political vacuum in the country has created tensions in other cities. Throughout the country, many coal and gold mines were attacked, looted and equipment destroyed in the first couple of days of the protests. As more people travelled from other regions to Bishkek, it created fear among the city dwellers. Starting from October 6th, residents and activists of the city have formed vigilante groups (druzhinniki) to deter any possible looters that accompanied previous uprisings.[15]

The current protests in Kyrgyzstan also bring disconcerting flashbacks on the wave of protests that took place in 2005 and 2010. In 2005, the Tulip Revolution led to the ousting of the Askar Akayev’s fall from power. The revolutionaries alleged corruption and authoritarianism by Akayev, his family and supporters. When Kurmanbek Bakiyev became Kyrgyzstan’s head of state the promises of democratic change and reforms quickly faded away to give space to corruption and cronyism. Five years later he was overthrown by what is known as the ‘April Revolution’. Bakiyev’s removal from power was bloody and were followed by violent and deadly ethnic clashes in the south of the country.

Although the recent protests are also about the same issues of corruption, political nepotism, and deteriorating economy, there are differences between the past and the current political unrests.

First, this year’s protests are taking place against the background of the COVID-19 pandemic, which has exacerbated economic crisis and ravaged the country’s healthcare system.[16] The Government’s handling of the pandemic left citizens in anger and disarray. The pandemic was largely eased by the help of local volunteers who filled the Government’s gaps in dealing with the crisis in the country of 6.5 million people.[17] During the pandemic there was a huge grassroot movement to help people left out of the healthcare system with transportation and medicine, led by younger generation of Kyrgyz citizens.

Secondly, the organisation of protests has changed in comparison to previous years. The advancements in communication and media have helped the protestors to organise collective action. The proliferation of rapid information through media and social media channels such as YouTube, Telegram and Facebook, has made it easier for individuals to share updates and deploy rapid mobilisation. Additionally, as explained by the anthropologist, Aksana Ismailbekova: ‘the role of media has been important not only in allowing people to share information with each other, but allowing previously marginalized groups to participate in the conversation’.[18]

Third, and perhaps the most significant change, is that this year’s protests have been led by a younger generation of activists who demanded ‘old corrupt politicians’ to stay away from the Government. Most of these activists have taken part in grassroot activities since July 2020 amid the pandemic and then have made decisions to run the parliamentary elections with some of the pro-reform parties. The parties that have not gone through the seven per cent threshold.

Fourth, in contrast to the previous protests, the opposition factions were not united as it happened in 2005 and 2010.[19] Before October 9th, the opposition led by pro-reformist parties (Respublika, Ata Meken, Bir Bol, Reforma) could not agree on the main candidate for temporary Prime Minister to form the provisional government before the next election.

Fifth, the role of organised crimes in the country backing politician has been a prominent feature of the country’s past and current political upheavals. In some cases, state-crime relations are so entangled that it is difficult to distinguish between them[20]. Already during the first Revolution in 2005, the role of several key influential criminals in organizing and financing anti-Akaev demonstrations was apparent. Criminal groups were also involved in June 2010 inter-ethnic clashes in Osh[21]. The state-crime relations reached unprecedented levels during Bakiyev’s time when prominent organised groups had infiltrated the political establishment by having seats in the parliament and government[22].

During Atambayev’s presidency, there was not such a direct connection between organised criminal groups and the state. However, it was under his ruling that underground contraband economy and money laundering was established. Some official state representatives (Matraimov for instance was a deputy head of the State Customs Service) by forming allies with the trading business between China and Kyrgyzstan, other Central Asian countries, have developed an underground economy that have led to loss of huge amount of money in the state budget. But it was during Jeenbekov’s presidency that these groups have co-opted the government to secure the smooth running of their business operations. In the current context, it is suggested that Japarov has become connected to the Matraimov’s family, one of the wealthiest and most powerful families in Kyrgyzstan. It was the Deputy speaker Mirlan Bakirov, a member of Mekenim (My Homeland), a party allegedly funded by Rayimbek Matraimov who proposed Japarov for the role of prime minister[23]. Additionally, some MPs accuse Japarov to be connected with Kamchibek Kolbaev one of the country’s most notorious criminal leader. Several lawmakers reported that they have been threatened by the Kolbayev’s criminal group[24].

As of Wednesday 14th October, the President has ratified the parliamentary vote, which makes the appointment of Sadyr Japarov to the post of Prime Minister official.[25] Although Japarov’s candidacy and its legitimacy is contested by the international community, lawmakers and internal factions, its appointment sets Kyrgyzstan to an uncertain path. Sadyr Japarov is a former adviser to former President Kurmanbek Bakiyev and a fervent nationalist.[26] His previous political demands for nationalisation of ‘Kumtor,’ one of the largest gold mines in the country, are now uniting many people from rural regions from both north and south to fight foreign influence in the extractive sector and gain ownership over natural resources .[27] In the these past few years, nationalist and anti-foreign narratives have become useful tools for country’s politicians to gather supporters.

Yet despite these uncertainties, what the current political turmoil demonstrates, is that we should not underestimate the role of youth movements in organising political upheavals. The young generation in Kyrgyzstan involved in politics of the country has a specific policy agenda which runs through formal party structures[28]. Many of them aspire to improve political governance in the country.

The unreliability of the state to provide for its people, drove the population to rely on themselves and their community. As a result of systematic political crisis, independent and self-organised youth led networks have emerged offering alternative forms of governance which fulfil the services provided by the state. The failure of the state to adequately perform its self-defined function and respond to the needs of the population seeded autonomous social values and activism. As the regional analyst Erica Marat notes: “with every cycle of political turmoil and government dysfunction, civic networks only grow stronger”.[29]

While it is still not clear who is in charge of the country, following Jeenbekov’s resignation on Thursday 15th of October, one thing is certain: the Kyrgyz population is in search for its political identity and has divergent views on the country’s governance.

Saipira Furstenberg, University of Exeter– is currently affiliated with the University of Exeter as a research associate. She previously taught politics modules at Oxford Brookes University. Her research interests are in post-Soviet region of Central Asia, extra-territorial politics, international dimensions of democracy and global governance.

Gulzat Botoeva, University of Roehampton – is a Senior Lecturer in Criminology at the University of Roehampton. She is a sociologist working on topics of illegal and informal economies (drug production, illegal gold mining and illegal monies) in a post-Soviet context. She has published with Theoretical Criminology, The International Journal of Drug Policy, and Central Asian Survey journals.

Image by Izvestia under (CC).

[1] Colleen Wood, Is This the Beginning of Kyrgyzstan’s Next Revolution? Foreign Policy, October 2020, https://foreignpolicy.com/2020/10/07/beginning-kyrgyzstan-next-revolution-election-protests-bishkek/

[19] Bruce Pannier, Is a hidden power in Kyrgyzstan undermining the opposition’s drive for change?, October 2020, https://rus.azattyq.org/a/a-hidden-force-in-kyrgyzstan-hijacks-the-opposition-s-push-for-big-changes/30892873.html

[28] Eurasianet, Kyrgyzstan: Does parliament have room for reform?, September 2020, https://eurasianet.org/kyrgyzstan-does-parliament-have-room-for-reform

Protecting the UK’s ability to defend its values: Executive Summary

Protecting the UK’s ability to defend its values: Introduction